Netizen reached out to Dole PH, not the Department of Labor & Employment

Most of us have been facing financial difficulties because of the COVID-19 pandemic. With a lot of Filipino employees taking pay cuts, working from home, or in the worst case scenario, getting retrenched, personal budgets have needed some serious streamlining.

We love to take to social media to talk about our troubles. Many tweets and Facebook posts have talked about financial struggles resulting from the pandemic. Some people have even gone as far as to message government offices such as the Department of Labor and Employment (DOLE) on Facebook.

A Filipino netizen messaged the wrong Facebook page, only to come out of the situation with P5,000 (~USD99) worth of fruit products.

Mistook Dole Food Company for the Department of Labor and Employment 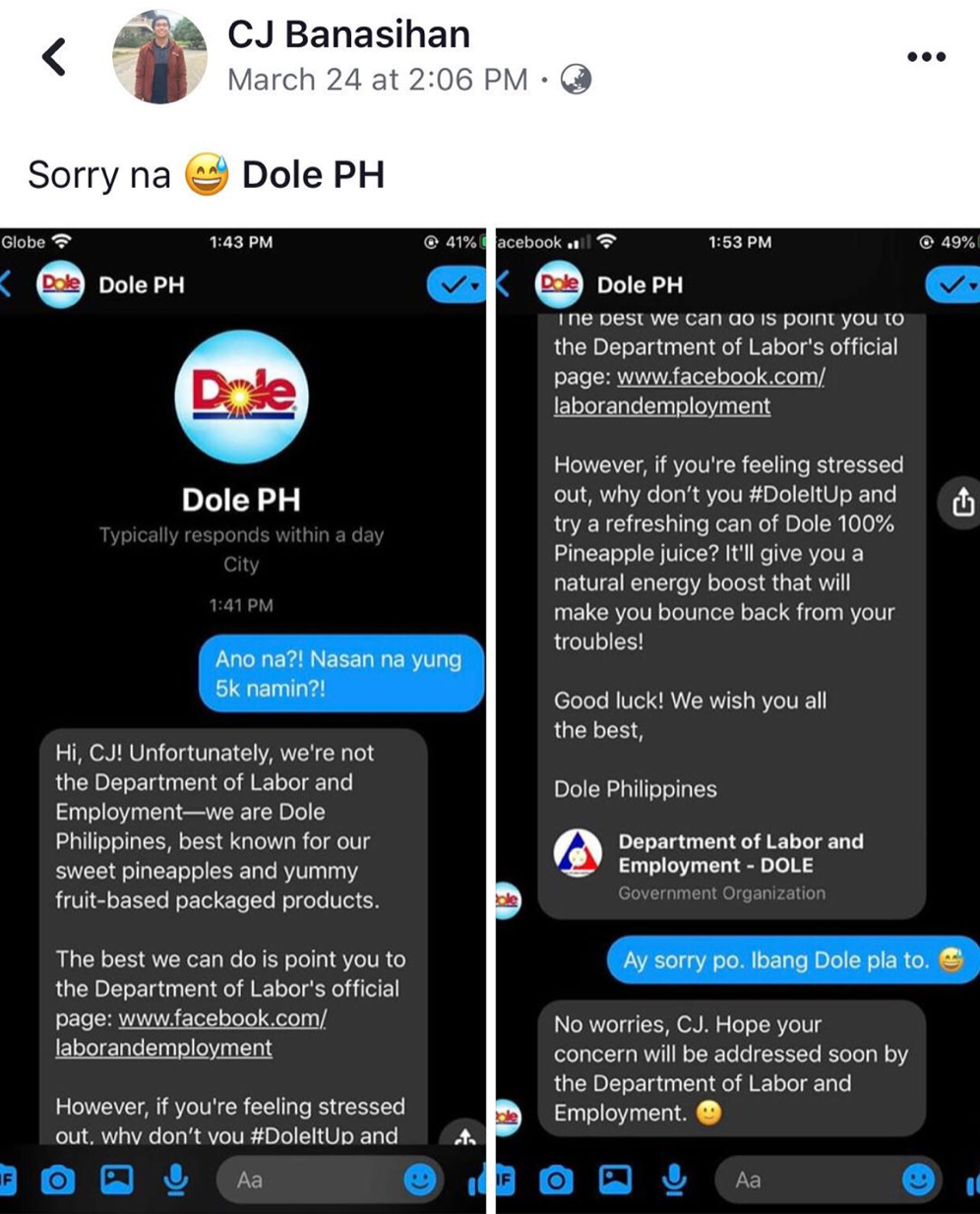 On 24th March, CJ Banasihan had yet to receive the P5,000 subsidy promised by the Department of Labor and Employment (DOLE) to Filipino workers whose jobs were affected by the lockdown.

To be fair, Dole PH and DOLE are spelled almost the same way, so it’s an easy mistake to make.

Dole Food Company handled the situation in the best way 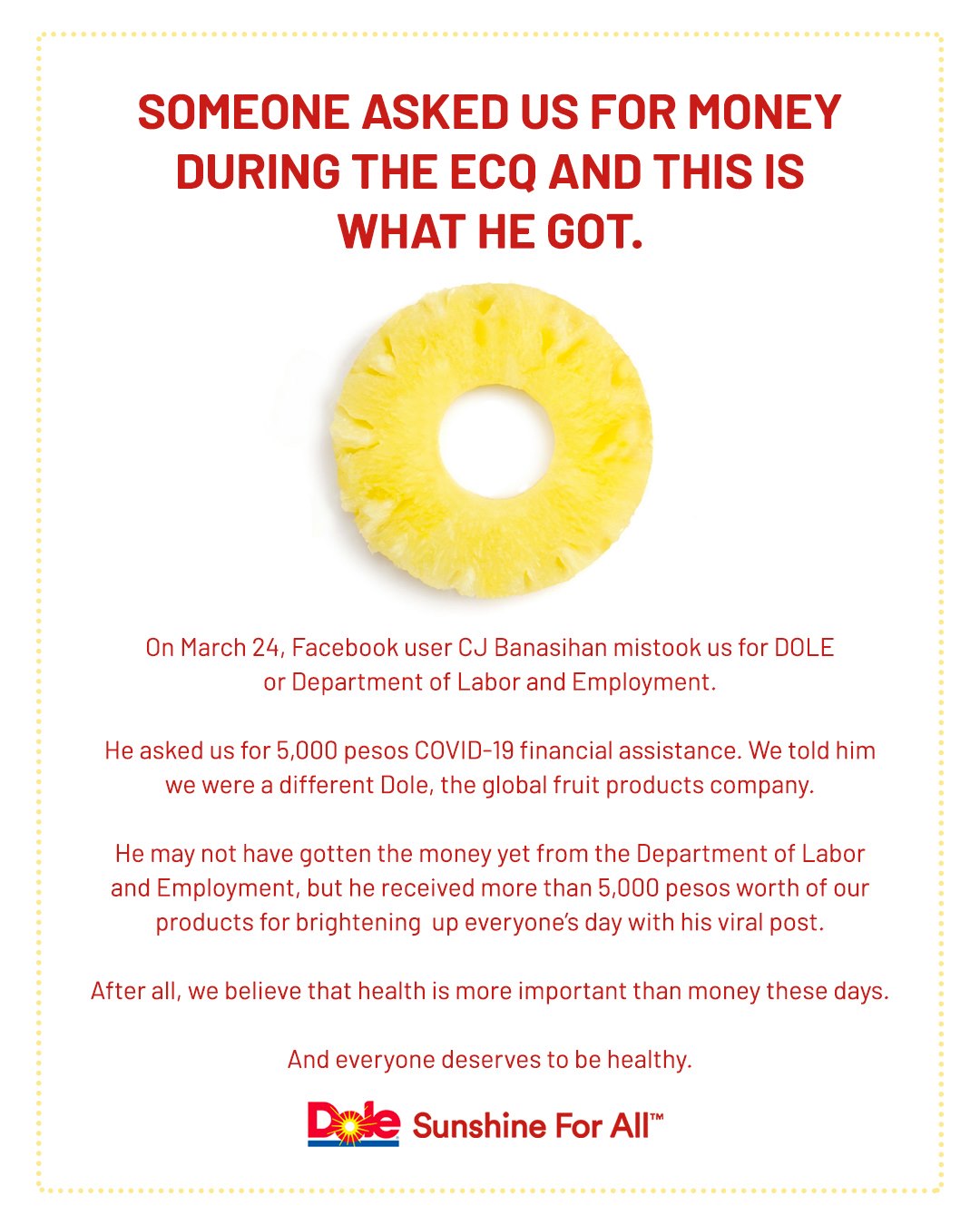 Instead of receiving a defensive message or an automated reply, Banasihan was met with a cheerful message directing him to the correct DOLE government website. Dole PH also wished him the best. 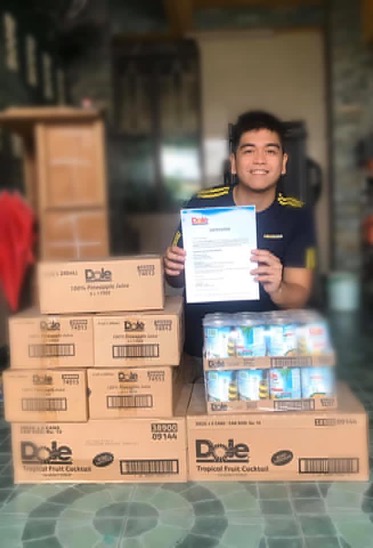 The best part is that Dole is a fruit company, so not only did Banasihan get a ton of fruits to eat and ingredients to cook with, but he could also binge on these healthy products and get extra vitamins.

Update on the DOLE subsidies

DOLE has already distributed P441.9 million to 88,388 workers whose jobs were affected because of the enhanced community quarantine. However, as of 8th April, Banasihan has yet to receive his own subsidy from DOLE. Hopefully, the help from Dole PH tides him over until he does. 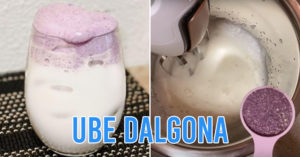 Filipina Youtuber Makes Ube Dalgona By Putting A Filipino Twist On The Dalgona Trend, Using Ube Instead Of Coffee Powder
Filipinos Wear Hilarious Costumes In Markets To Protect Themselves Against COVID-19 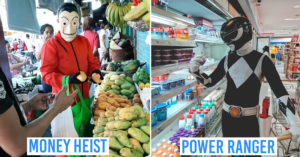