Learning a thing or two about Tagalog is a must when visiting the Philippines. But if you want to get more conversational with us locals, you can level up your knowledge of the language by understanding the meaning behind some Tagalog slang that will help you blend in better with Filipinos.

To help you with the basics, here are 20 Tagalog slang words and phrases that you’ll often hear spoken in the streets.


1. Lodi – to praise someone who’s done something impressive 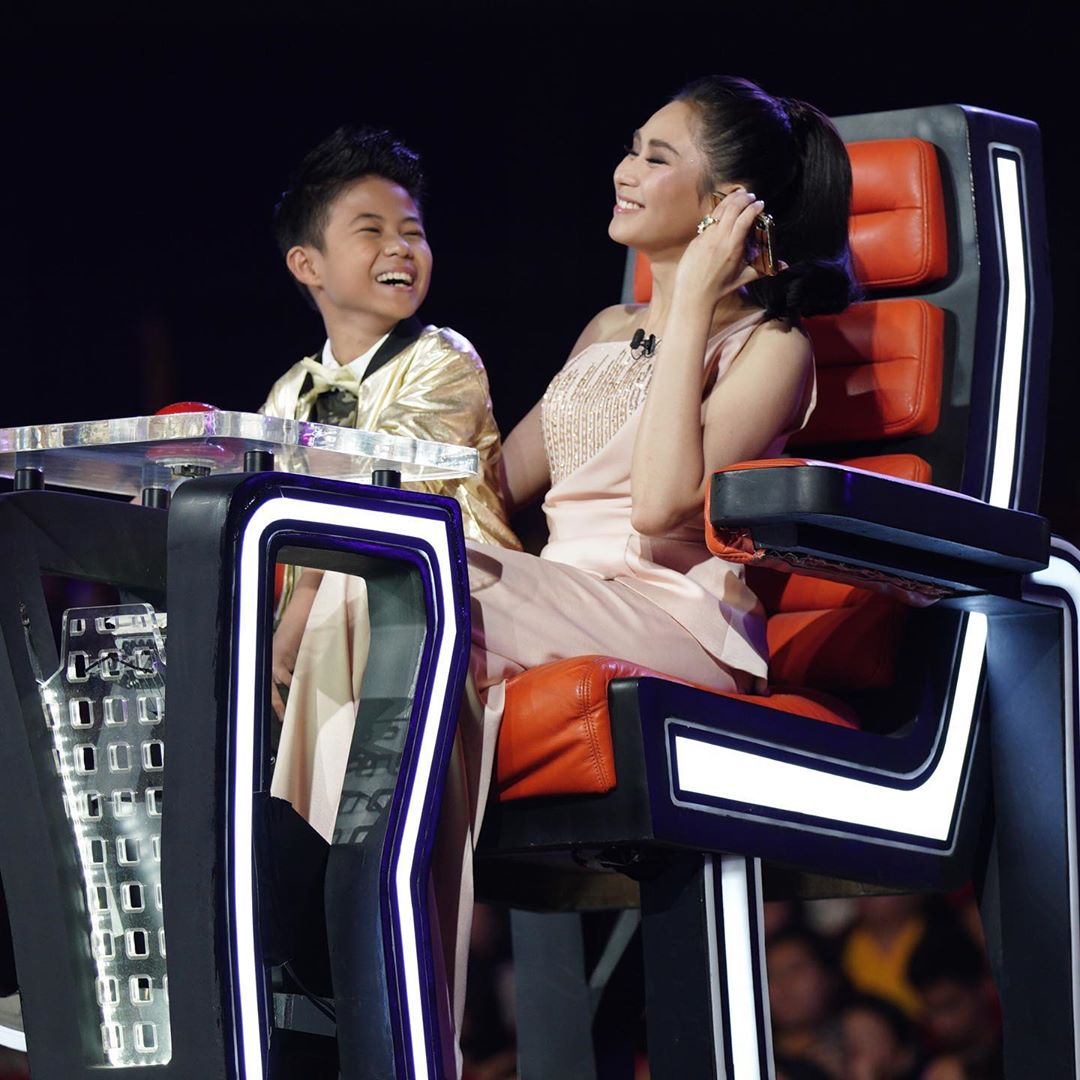 Sarah Geronimo (right) as a judge at The Voice Philippines
Image credit: @sarahgeronimoshots

To congratulate someone for getting things correct or for achieving a significant milestone, Filipinos often get creative by saying “Lodi!” instead of just saying “Wow!” or “Magaling!”, a standard Tagalog adjective that translates to great in English.

The word idol spelled in reverse, lodi is a slang term we use to express our admiration for someone in a casual way. It’s often said alongside petmalu, another slang term meant to also express amazement, but side note: petmalu is actually far from its original word’s meaning. It’s the reverse of the Tagalog word malupet or malupit, a term used to describe something or someone unkind.

So when you’re in a concert of singers like Sarah Geronimo and she’s singing a song with high notes, you can express your approval by saying “Lodi!”

2. Mumshie – endearment towards your mom or female friend 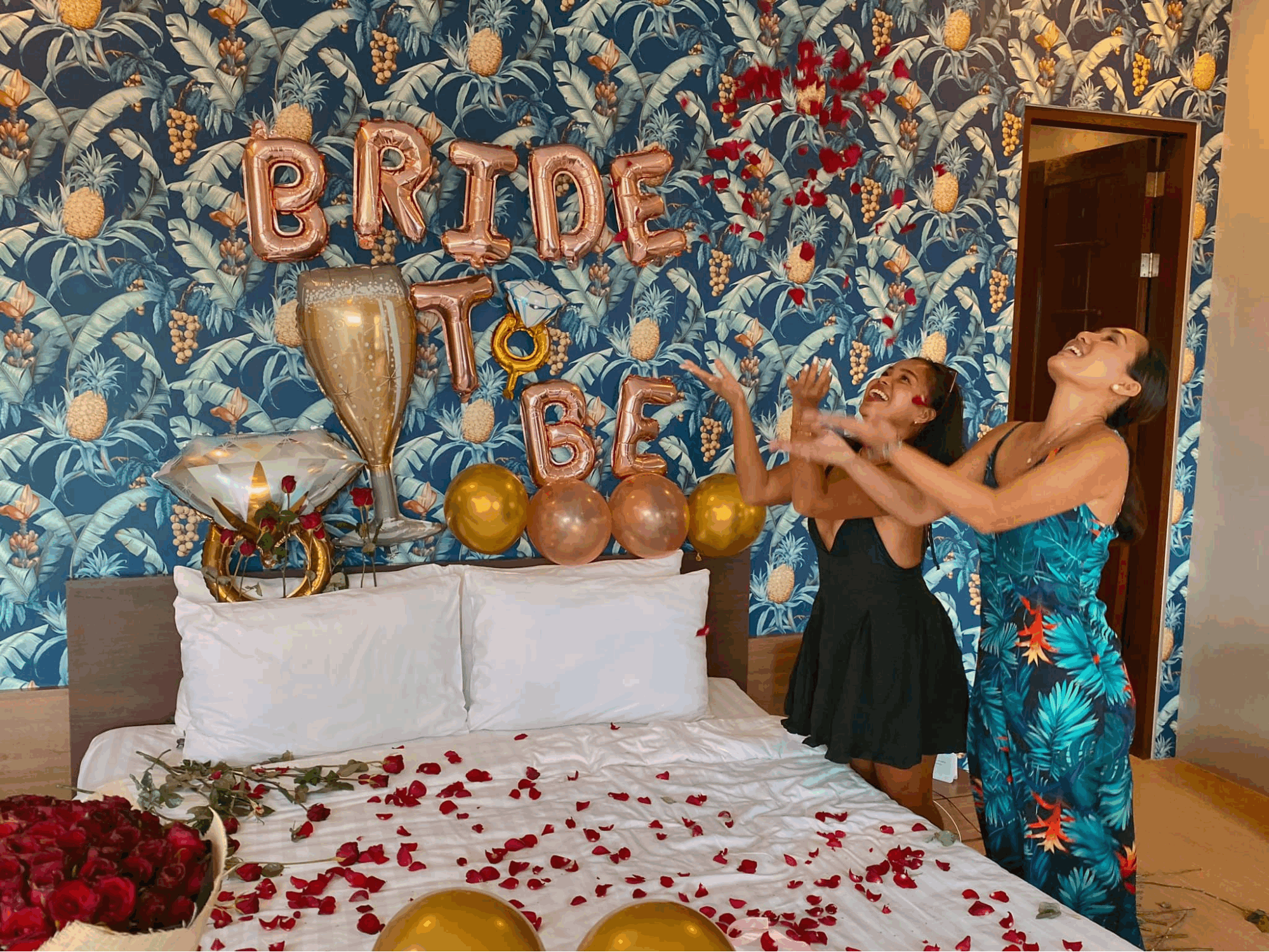 Mumshie is a slang that can be used in exchange for ma or mom when addressing anyone who is a mom, but it can also be used to express endearment toward close girl friends.

Instead of just saying “hey”, “friend”, “girl,” or other casual words to call a mom or a lady friend in a friendly way, you can add a bit of fun to the convo by calling her  “mumshie” instead.

3. Pak ganern! – to illustrate a point 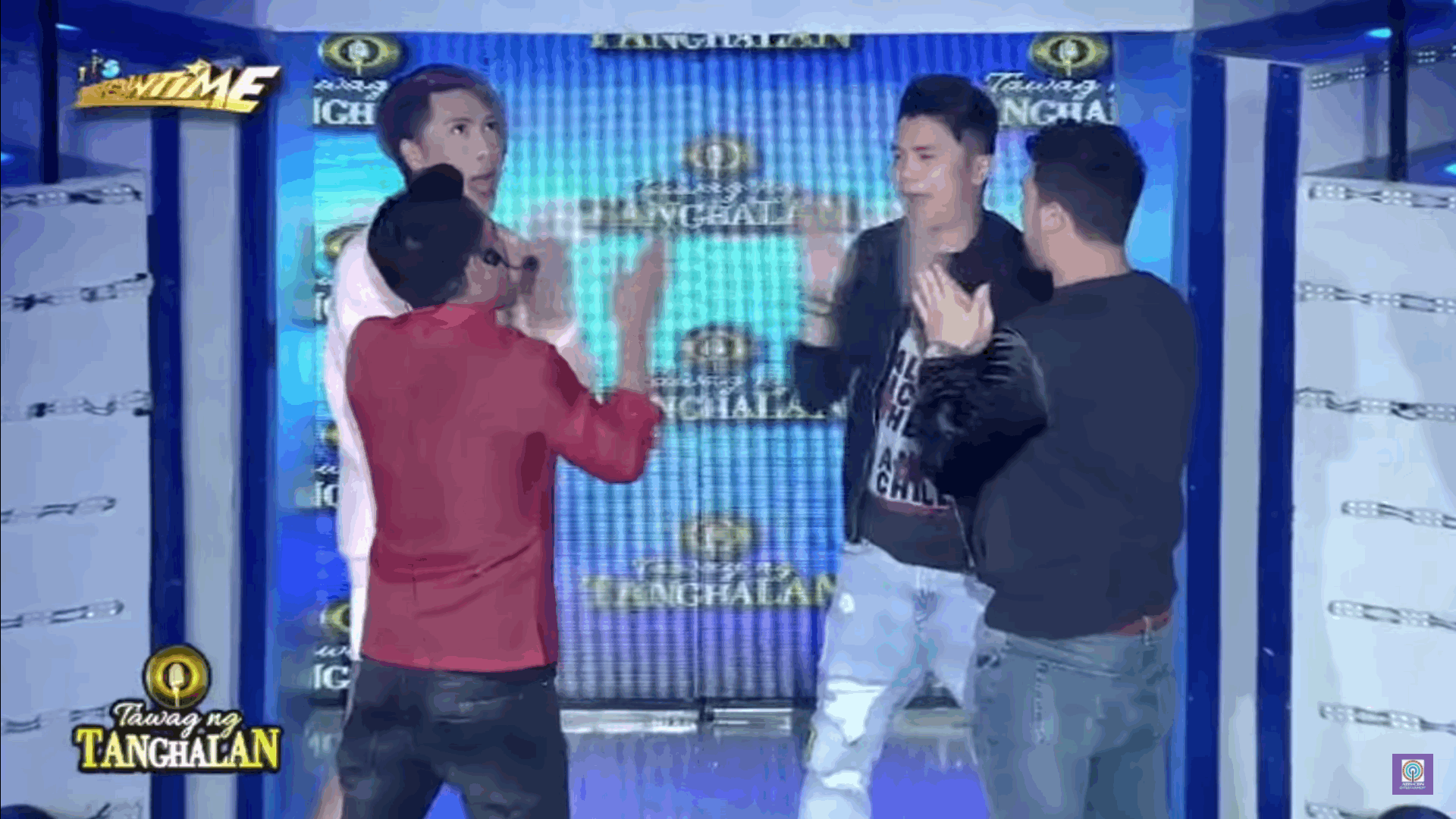 When locals teach someone how to do something, you can probably hear them adding “pak ganern” when they’re done illustrating their point or showing you what you need to do. Originally from the Tagalog words tumpak, which means on point, and ganoon, which means “like that” in English, pak ganern is Filipinos’ way of adding fun, swag, and humor.

But the slang term “pak ganern” actually doesn’t have an established meaning and can also be used to express general positive emotions, from happiness to excitement to surprise. After showing off your dance moves to an audience, for example, you may hear a “pak ganern!” uttered by a delighted audience.

Comedian Vice Ganda has popularized the term, and a game called Pak Ganern was even a segment in 2016 at It’s Showtime, a noontime show on ABS-CBN that he hosts. 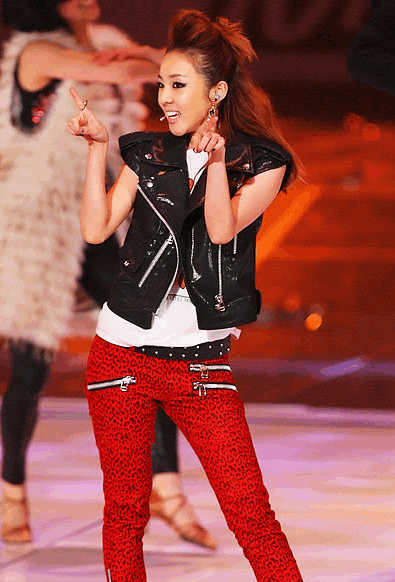 Sandara Park
Image credit: All About the Discovery

Perhaps because she had been popular in the Philippines first before she became big in South Korea, Gandara Park is a slang term that originated from the name of K-Pop star Sandara Park. The slang phrase isn’t actually used to associate someone with Sandara Park or anything Korean per se, but to generally express admiration for someone’s beauty, as the Tagalog word ganda means beautiful in English.

When a friend looks well dressed, you can compliment them lightly by saying “Wow! Gandara Park.” 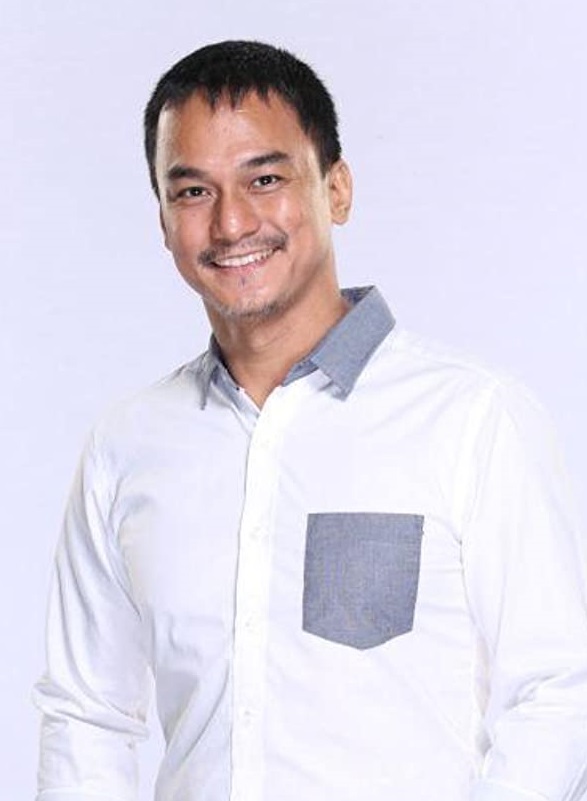 Because Filipinos tend to use celebrity names in creative ways, sometimes you can hear them saying “I’m Haggardo Versoza na,” without actually referring to Gardo Versoza, a Filipino actor.  Haggardo Versoza, a play on the actor’s name, is a slang phrase that means “haggard” or “worn out”.

Sometimes, the phrase can even be substituted with the term “Stress Drilon” that means stressed. Like Haggardo Versoza, the slang came from the name of a popular Filipino personality – it’s a rearranged form of a popular Filipina journalist’s name, Ces Drilon. Like most Filipino slang, werpa is a slang that resulted from wordplay. A reversed Tagalog version of the English word “power”, “werpa” is used to encourage someone and give them more support.

If a friend is taking a job interview or an important exam, wish him good luck and say “Werpa!”

7. Awra – to encourage someone to make their presence known 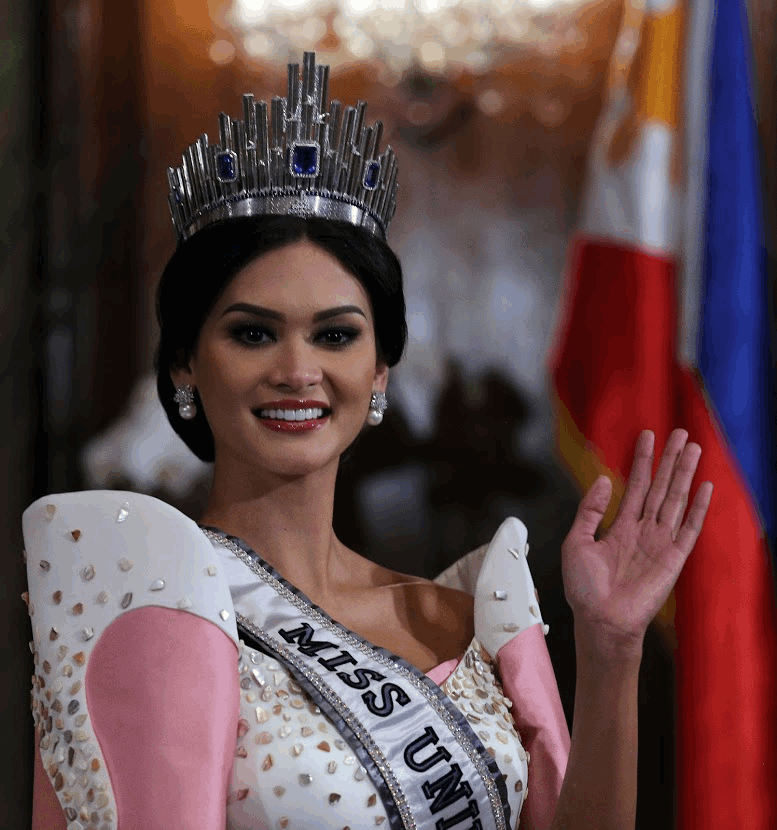 Popularized in Filipino gay culture, awra is a creative version of the English word “aura”. It doesn’t literally mean “atmosphere” like what the English word means, but it means to make your presence known or attracting attention.

You can use the word to encourage someone to dress well for an event: “Um-awra ka tomorrow, ha?” (Dress the part tomorrow, okay?) It can also be used with the slang word pak, which is a short term for tumpak or on point, to convey your appreciation for someone’s OOTD: “Yes gurl, pak awra!”

8. Chika – another term for gossip 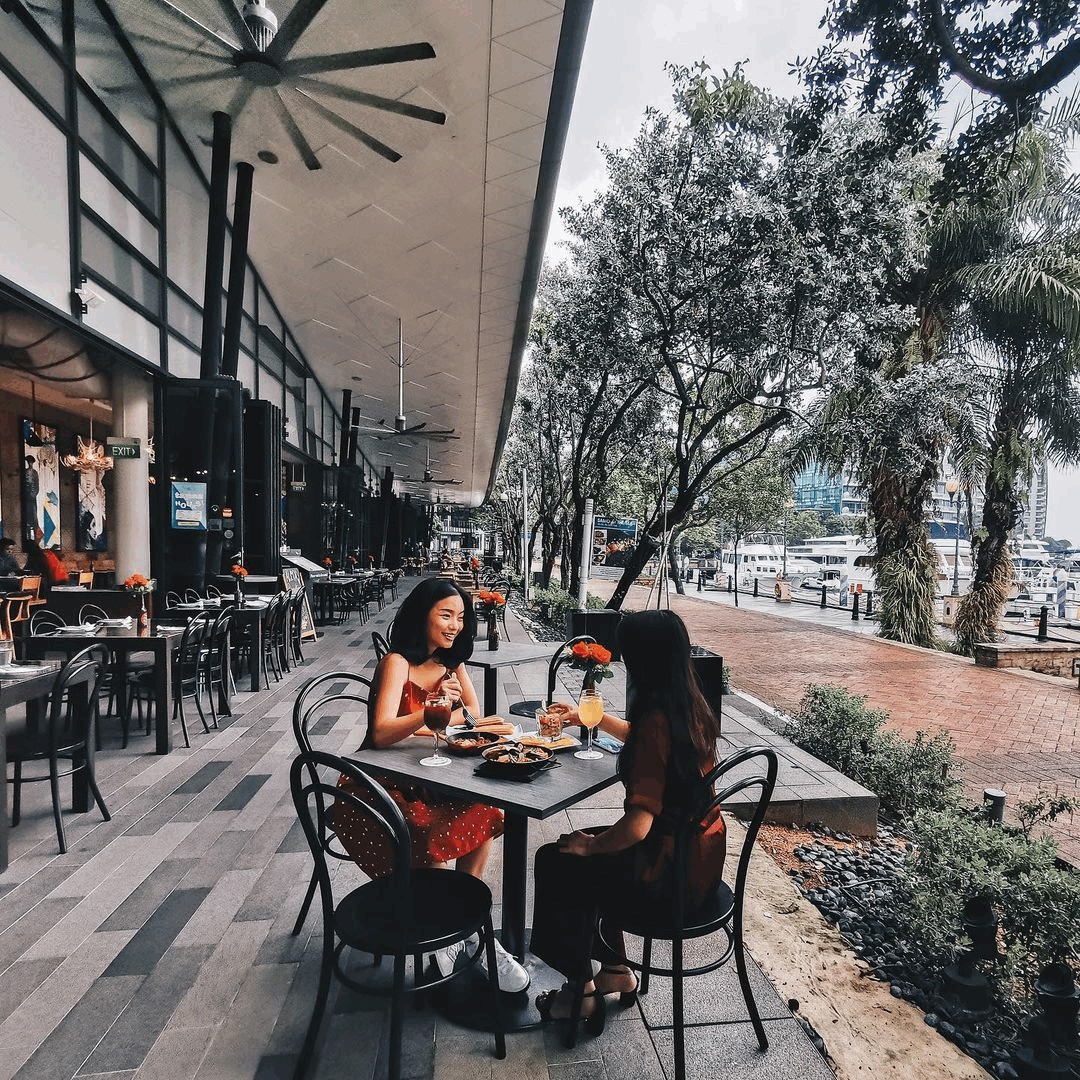 In lighthearted conversations, chika is often a slang term that crops up in between sentences. The word is the slang counterpart of the Tagalog word tsismis, which is borrowed from Spanish and is the standard Tagalog word for gossip. 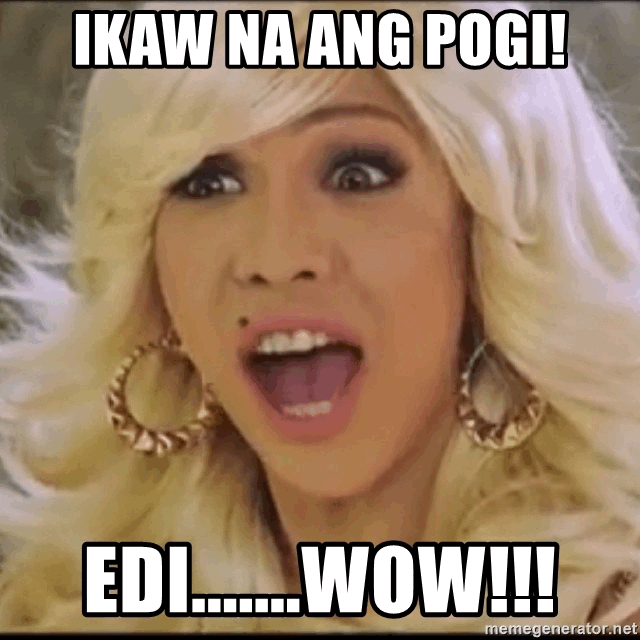 Popularized by Vice Ganda, e ‘di wow is a sarcastic phrase locals use to comment on someone who has praised themselves or bragged about their achievements.

While it has the English word ‘wow,’ it doesn’t necessarily mean that you’re expressing admiration for someone. Rather, it’s an expression that can mean ‘I don’t care’, so the phrase is usually spoken lightly among close circles as it can be offensive to say it to a person you barely know.

10. Jowa – slang term for significant other 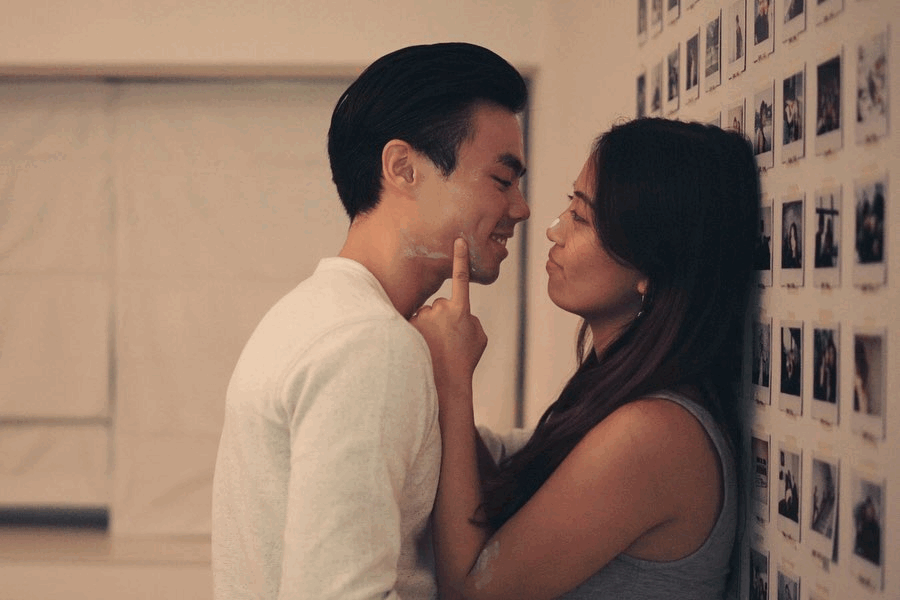 When referring to their significant other in a casual way, locals often call them jowa. The term is a Tagalog slang term that means a partner in a romantic relationship, and it is also often used as a verb when you want to ask if someone can become your significant other.

For example, “Dapat ko ba siyang jowain?” means “Should I be romantically involved with him/ her?” and is something you could ask a friend when you’re confused. Sometimes, jowa is also spelled as dyowa. Havey is taken from the English word have. In colloquial usage, it’s used as a positive response to a question about whether or not you possess something. For example, if someone asks you if you have money to spare, an informal way to respond that you have is by saying havey. But aside from denoting ownership, the slang term can also be a way for you to express approval. “Ang havey naman ng pormahan mo”, for example, means “You look so good.”

Waley, on the contrary, is taken from the standard Tagalog word wala that means none. This slang term also means the same thing, and is a more casual word used to denote that you don’t have or don’t possess something that’s asked of you. 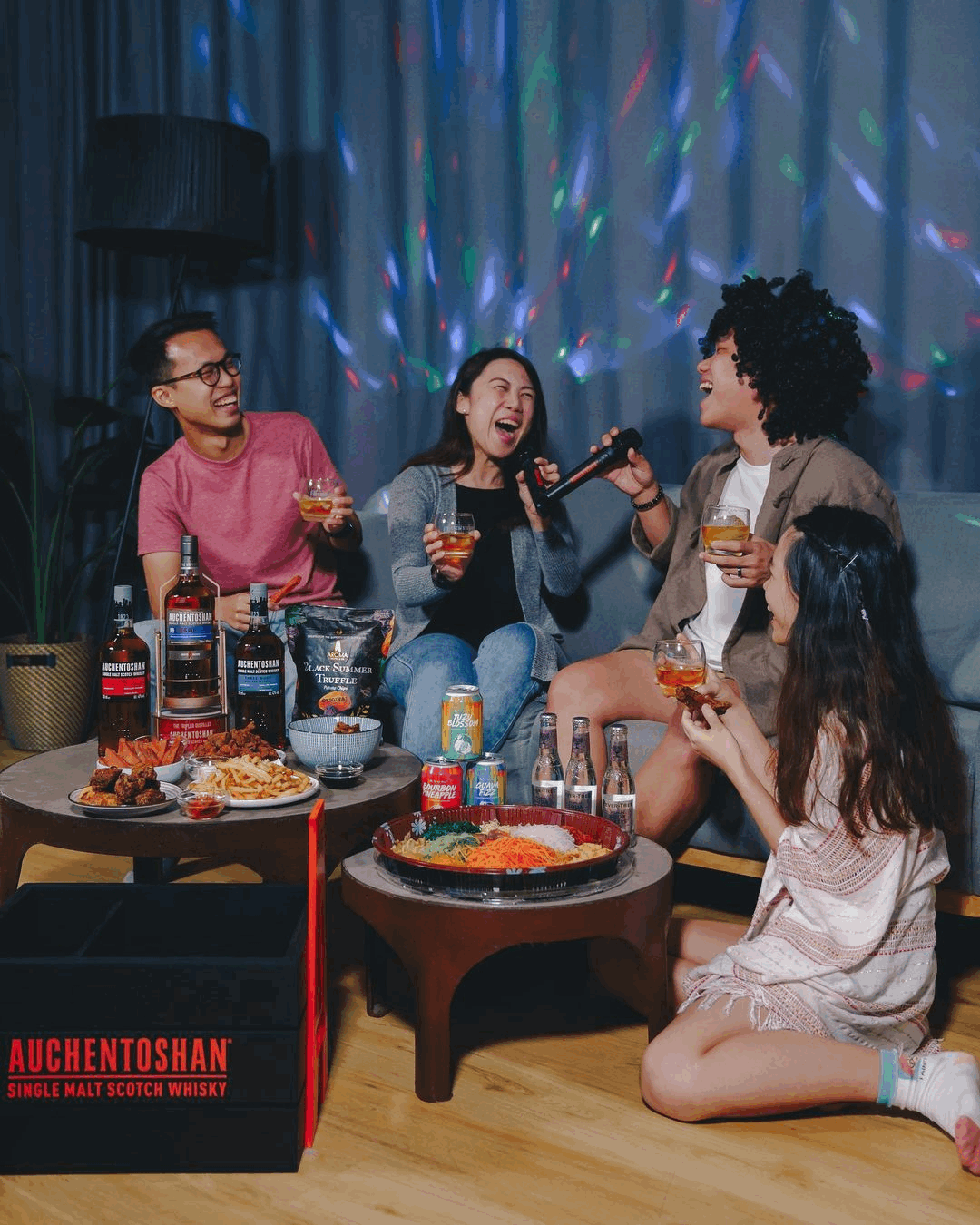 The term walwal is a slang you can hear mostly among the young, because it means to get drunk or to get wasted. It also refers to any activity that includes having fun with friends over alcohol and stories all night long. “Magwawalwal kami later,” means “We’ll be having fun later with alcohol.”

True to the slang’s meaning, the popular Walwal Sesh podcast hosted by Filipino doctors-influencers tackles the complexities of love in this age through episodes that teach us how to nurse a broken heart, how to manage your expectations of your partner, and other sawi topics.

13. Pabebe – our answer to the Korean aegyo trend 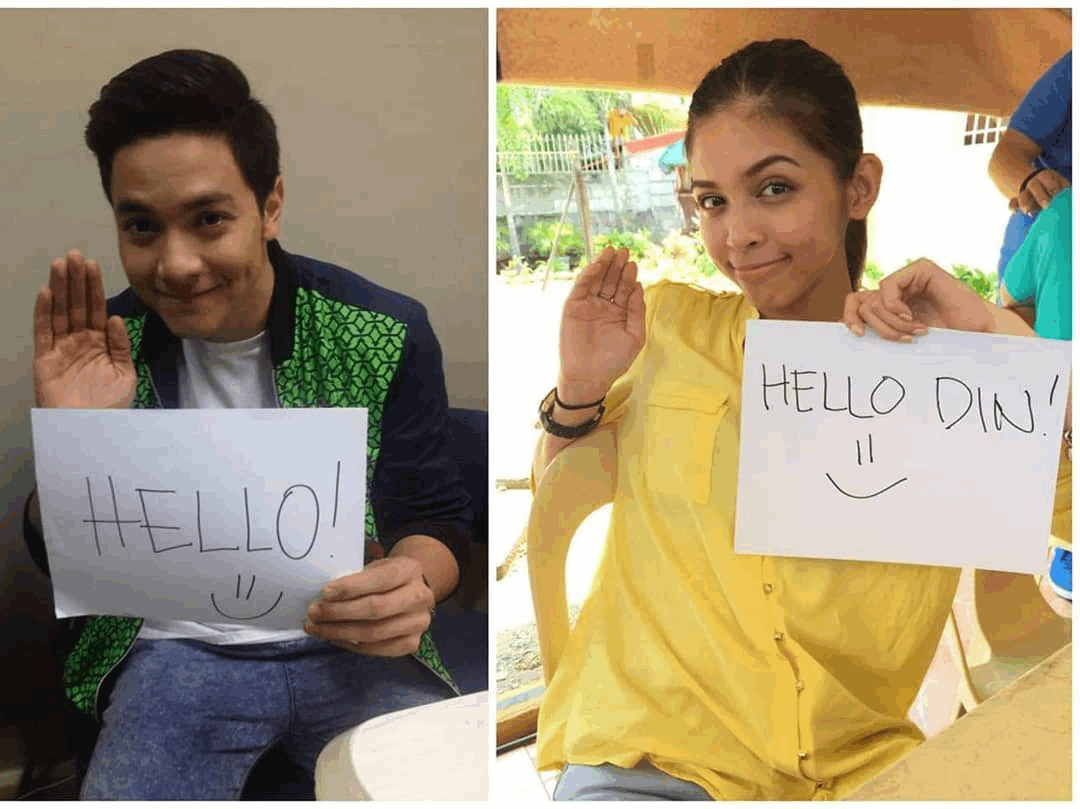 Pabebe is the slang Filipinos use to call someone who is trying to act cute as a baby would. Bebe comes from the English word baby, while the prefix pa means “trying to act”.

The AlDub love team, composed of Alden Richards and Yaya Dub (Maine Mendoza), from Eat Bulaga!’s Kalyeserye popularized the slang term in 2016 even more by introducing the pabebe wave, a gesture that includes waving your hand while trying to look cute or while being pabebe. 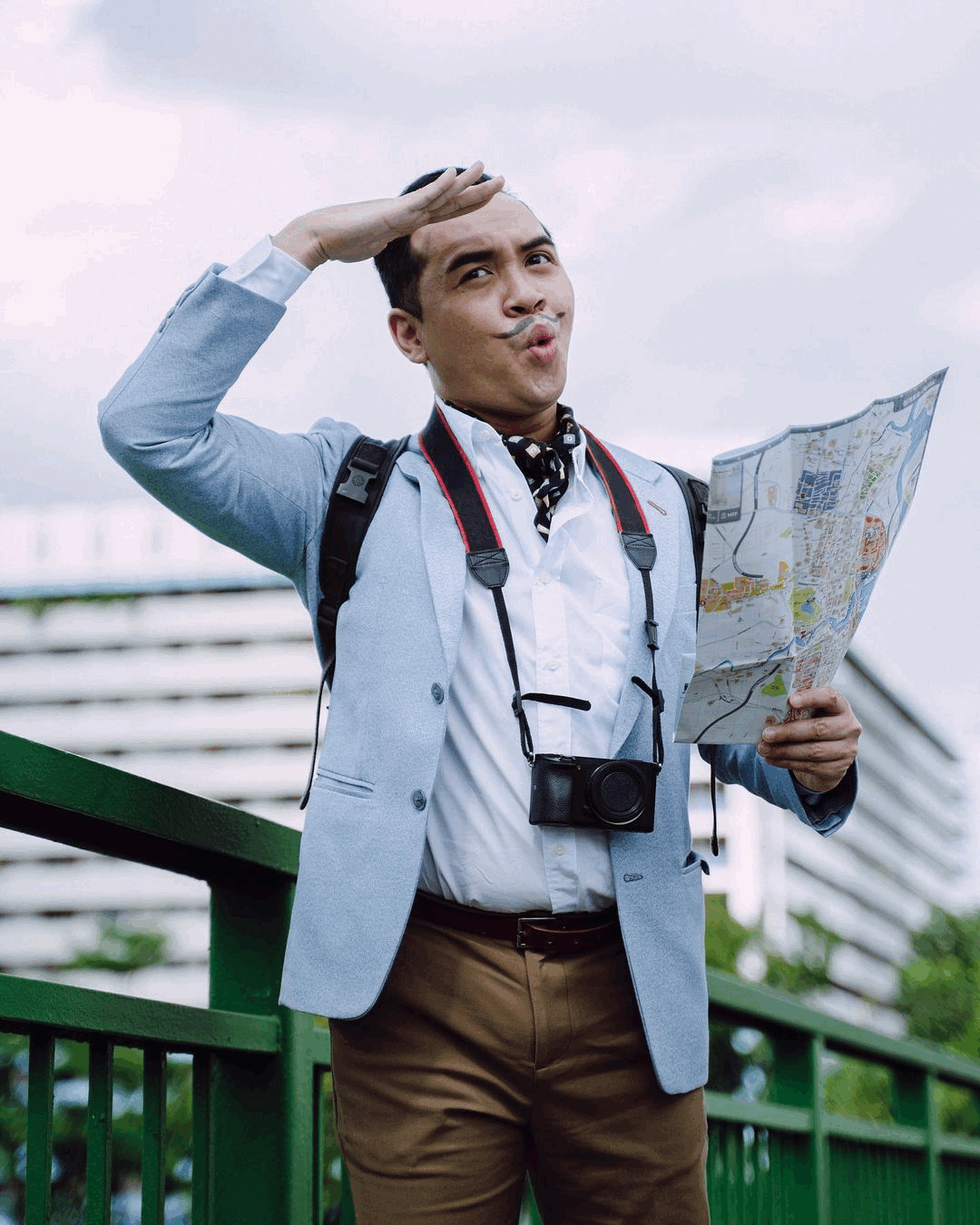 To call someone amusing or funny in conversational Tagalog, you can opt for the slang kenkoy. The term traces its origin back to Philippine comic character Francisco “Kenkoy” Harabas, who was created by writer Romualdo Ramos and illustrator Velasquez for Liwayway magazine in the 1920s.

It’s no wonder that kenkoy found usage in modern times, because the comic strip it came from was even translated into several dialects and was adapted into the film Kenkoy in 1950. 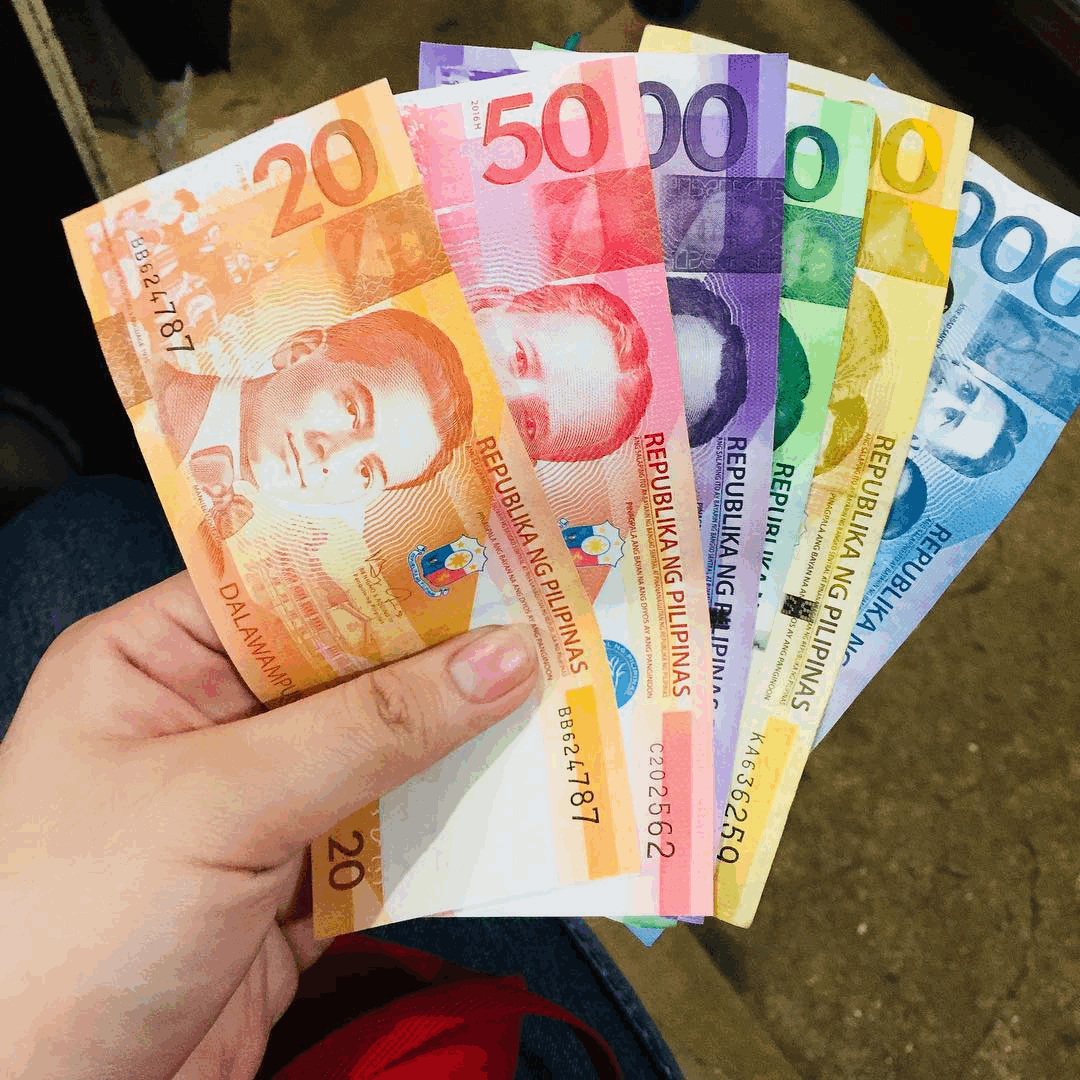 As money is something we use every day, you can expect locals to have various versions of the word money in their local language. While pera is the standard Tagalog word for money, the informal term datung is sometimes used. When you’re running out of money, you can ask a friend, “P’wede bang makahiram ng datung?” (Can I borrow money?) To call someone cool or awesome, you can use the slang word astig along with a wow compliment. Aside from being used to praise someone, astig can also mean tough masculinity, so when you encounter a guy looking all macho with black boots or sleek Ray-Ban eyeglasses, you can tell him “Ang astig naman ng pormahan mo.” (Your fashion is so masculine.) 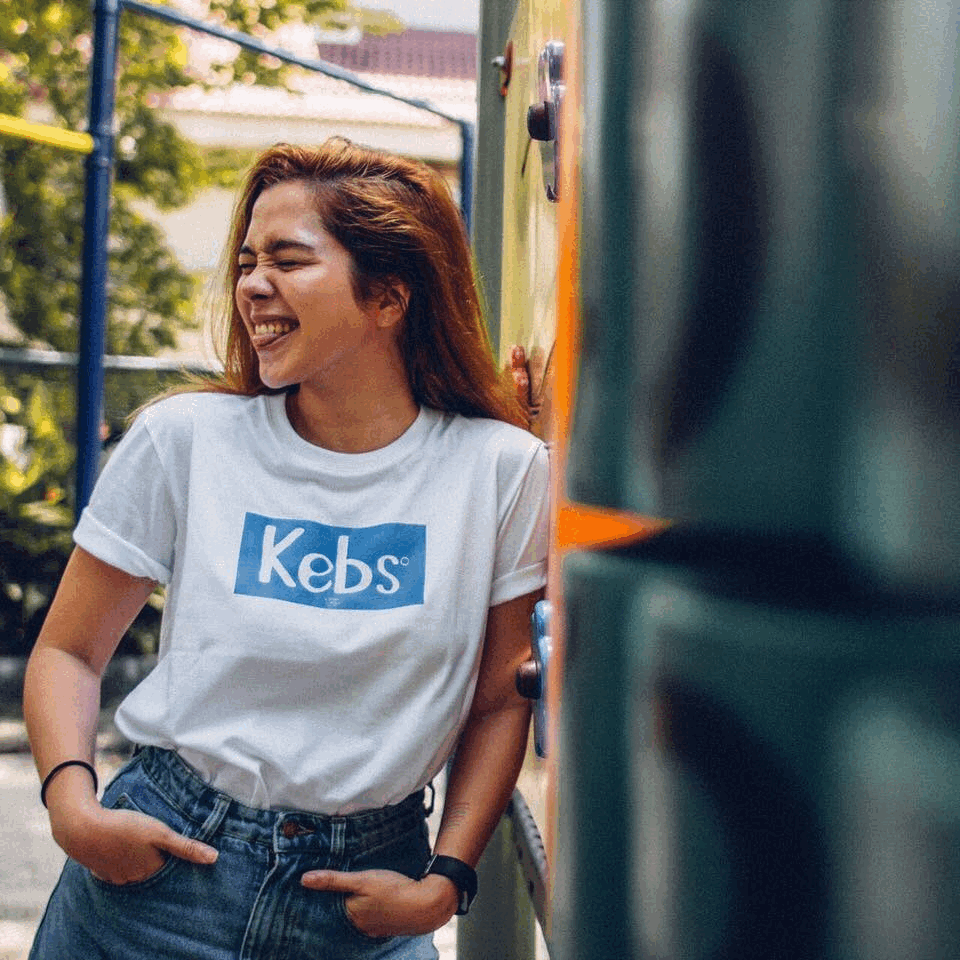 Saying “okay” has a lot of variations in local conversations, so when you want to offer your affirmation or consent in a more casual and friendly way, use kebs, a shorter version of the slang word keber. “Kebs” is a nonchalant way of saying “It’s okay, sure thing.”

When someone asks you, “Okay lang ba na hiramin ko ito?” (Is it okay if I borrow this?), you can respond to them in one word and say “kebs.”

Kebs is also often interchanged with keri, another slang word that also means to give a nod of approval for someone to carry on with whatever they are asking.

Instead of saying the standard Tagalog ano, which means “what” in English, you can add some lightness to your convo by uttering “anek,” a creative version of ano added with the letter e and k.

For example, if a friend messages you on Facebook with a “hey” without saying his clear intentions first, you can reply “Anek?” to coax some more words out of him.

19. Susmaryosep – combination of the words Jesus, Mary, and Joseph 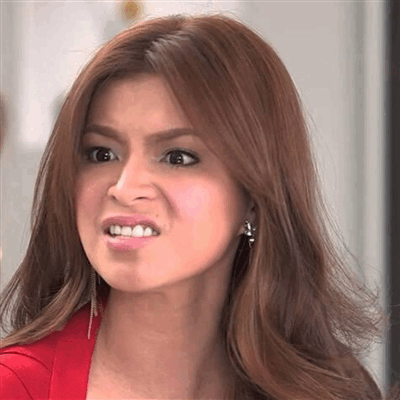 While OMG is an expression we can say when we’re caught by surprise, you can get more local when saying susmaryosep, a combination of the words Jesus, Mary, and Joseph, instead. Aside from denoting surprise, the slang term can also mean anger and frustration.

So when someone, for example, breaks one of your possessions, you can convey your dismay by saying “Susmaryosep! Sinira mo ‘yung gamit ko.” (Susmaryosep! You broke my stuff.)

20. Anyare – to ask someone about an incident 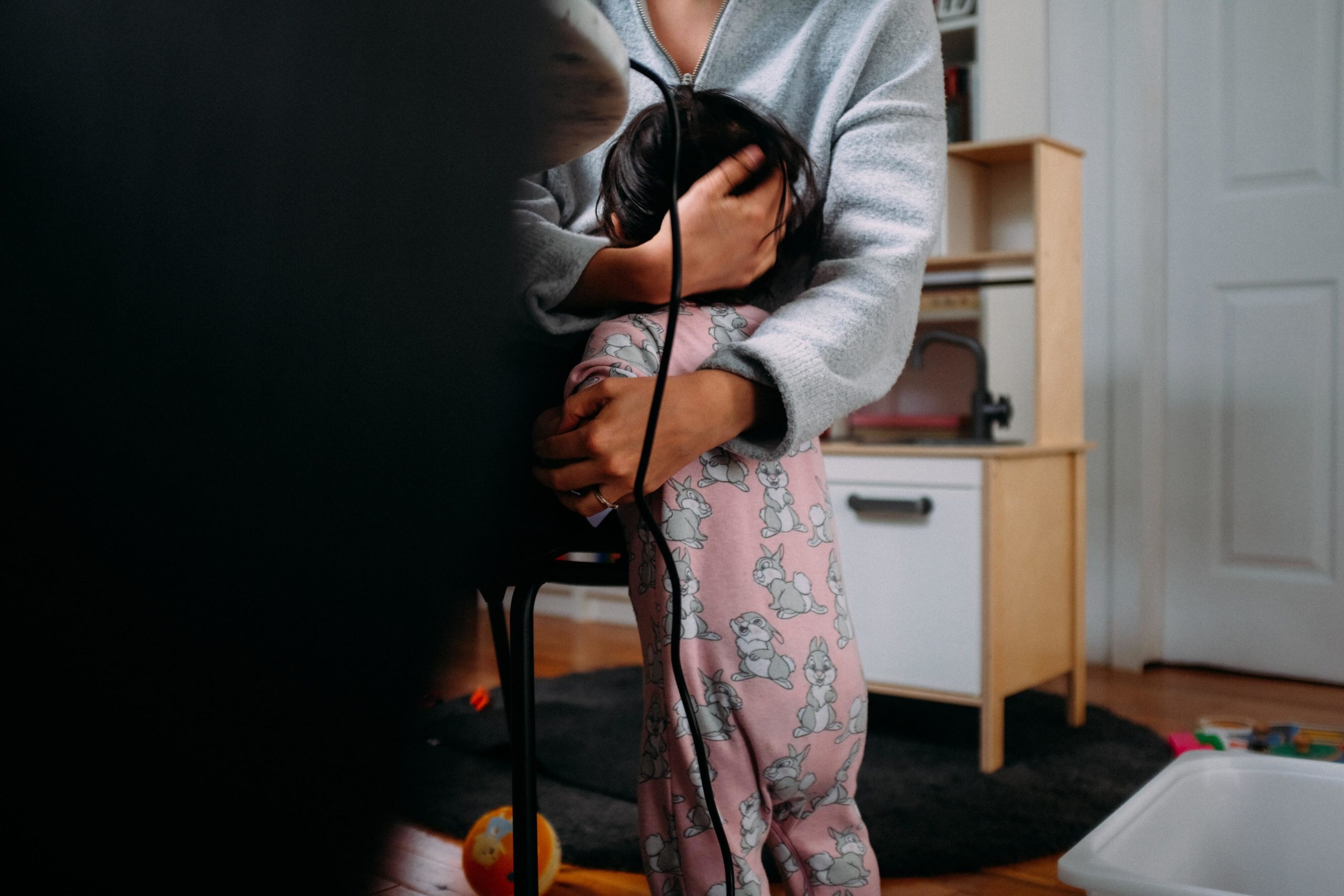 When a friend looks sad or worried, you can check up on him by saying anyare. The slang is a shortened version of the standard Tagalog sentence “Anong nangyari?” that means “What happened?” in English.

From reversed words to quirky phrases inspired by celebrities, Tagalog slang words and phrases really reflect the optimistic spirit of us Filipinos.

Feel welcome to use these slang terms as you converse with locals, and we might even tell you more about the rich nuances of our languages along the way.

Cover image adapted from: @thessa_maichards, @thesmartlocalsg, All About the Discovery 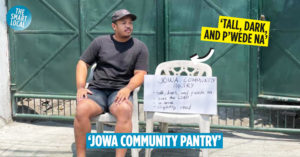 Single Guy Advertises Himself With ‘Jowa Community Pantry’ In A Bid To Find The One
Uniqlo Launches League Of Legends And Animal Crossing T-Shirts, So Gamers Can Now Battle In... 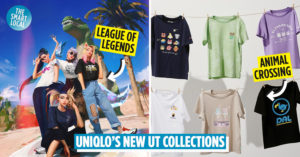