Now that it’s monsoon season, most of us crave dishes that could warm our stomachs during the cold weather. Luckily, plenty of hotpot and shabu-shabu restaurants offer fresh meat and veggies in flavorful broths throughout the metro.

Just in case you’re wondering, the difference between the two is how you cook the ingredients. With hotpot, you dump everything together in the steaming broth while you only cook spoonfuls for shabu-shabu. Regardless of how you’d want to enjoy delicious noodles and soup, here are restos around the metro you could visit: 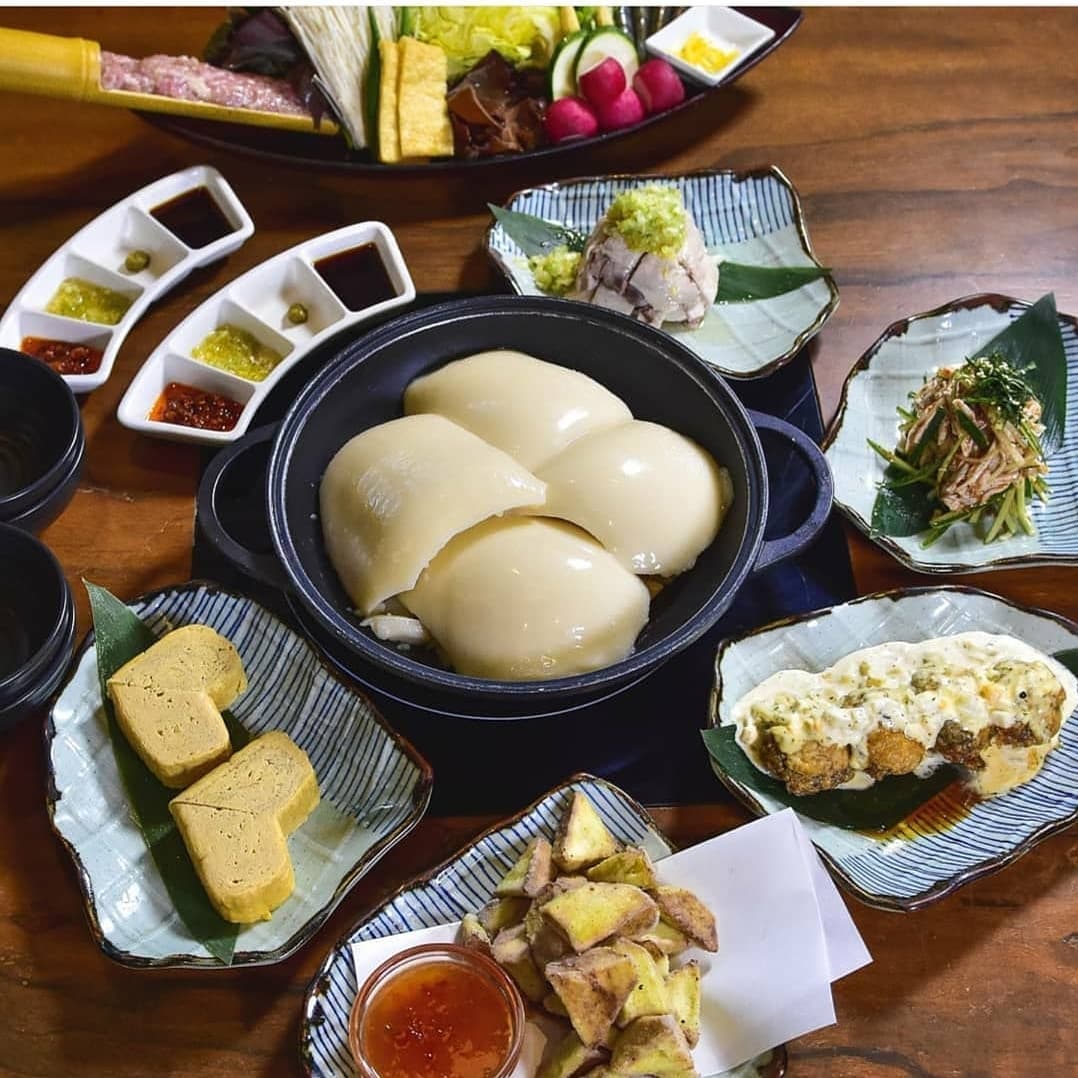 Who would’ve thought that there’s a hot pot broth that can apparently make you more beautiful? If you’re curious, drop by Bijin Nabe by Tsukada Nojo for their famous chicken collagen broth. According to some beauty experts, consuming collagen also replenishes what’s in our bodies and can make you youthful.

Try out their fresh meat, veggies, and seafood selection in this “beauty hotpot.” The collagen is from the highly-prized Jidori chicken, the wagyu of poultry meat. 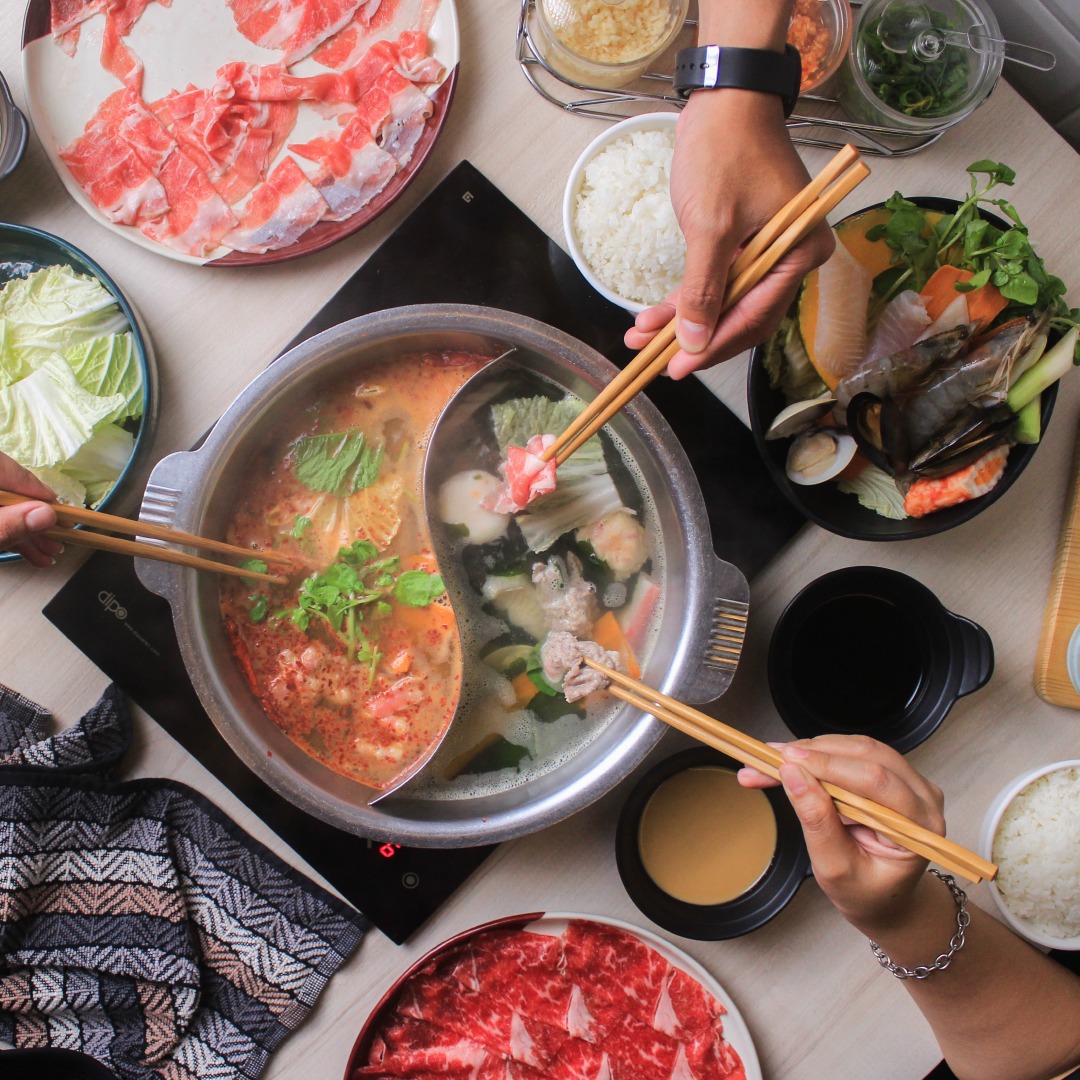 Half and half broth set.
Image credit: Ganso-Shabuway Philippines

The hotpot you’ll get at Ganso-Shabuway has distinct Japanese flavors. They have spicy miso and traditional seaweed broths, coupled with thinly sliced beef, pork, chicken, and tofu as well as a wide variety of vegetables you could add to achieve fuller flavors.

Aside from the slightly different cooking methods, another big difference between Japanese and Chinese shabu-shabu is their dipping sauces. Ganso-Shabuway has a light and tangy one to complement savory meat and another that is thicker and primarily made of shoyu (Japanese soy sauce) and garlic to add more umami to your food. 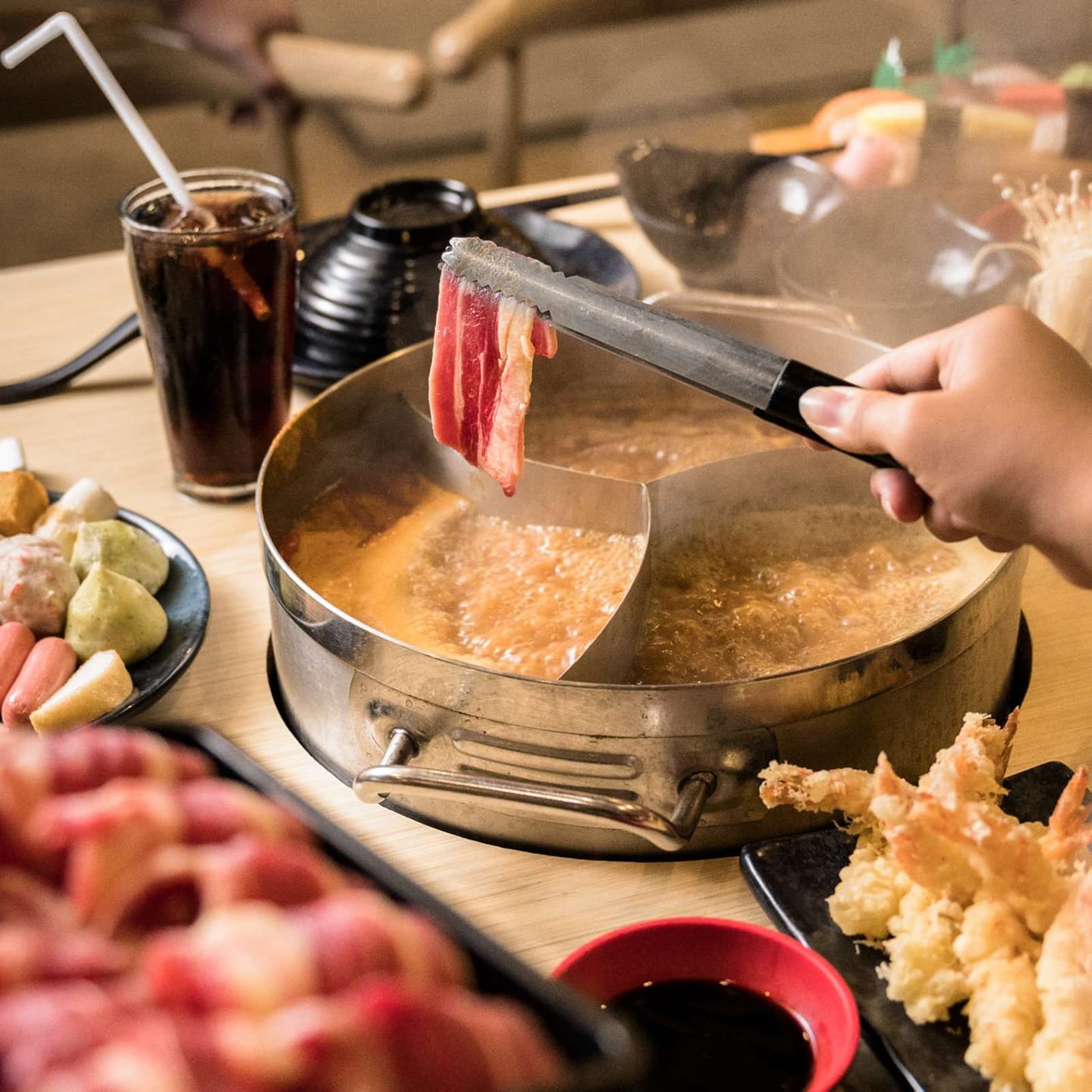 Usually, people drink someplace else before dropping by shabu-shabu restaurants for some warm soup. But, at Nabe Japanese Izakaya + Hotpot, you can drink and dine at the same spot. They offer unlimited meat and soup bases, so you’ll have plenty to try.

For the alcohol, you may choose from local beers and Japanese brands such as Asahi Super Dry, Sapporo, and Suntory. They also have sake and whisky for hard liquor enthusiasts. You may also add solo orders for sushi and sashimi, which are also top-tier pulutan (bar chow). Other hotpot and shabu-shabu restaurants sometimes treat veggies as an afterthought, but at Healthy Shabu-Shabu, they highlight fresh leafy greens. Those with dietary restrictions will best enjoy their vegetable set.

This restaurant also serves a healthy version of halo-halo made with fresh watermelon, kiwi, and mangoes. Natural sugars in fruits are better than artificially sweetened ingredients, so you can enjoy a dessert that’s actually better for you. 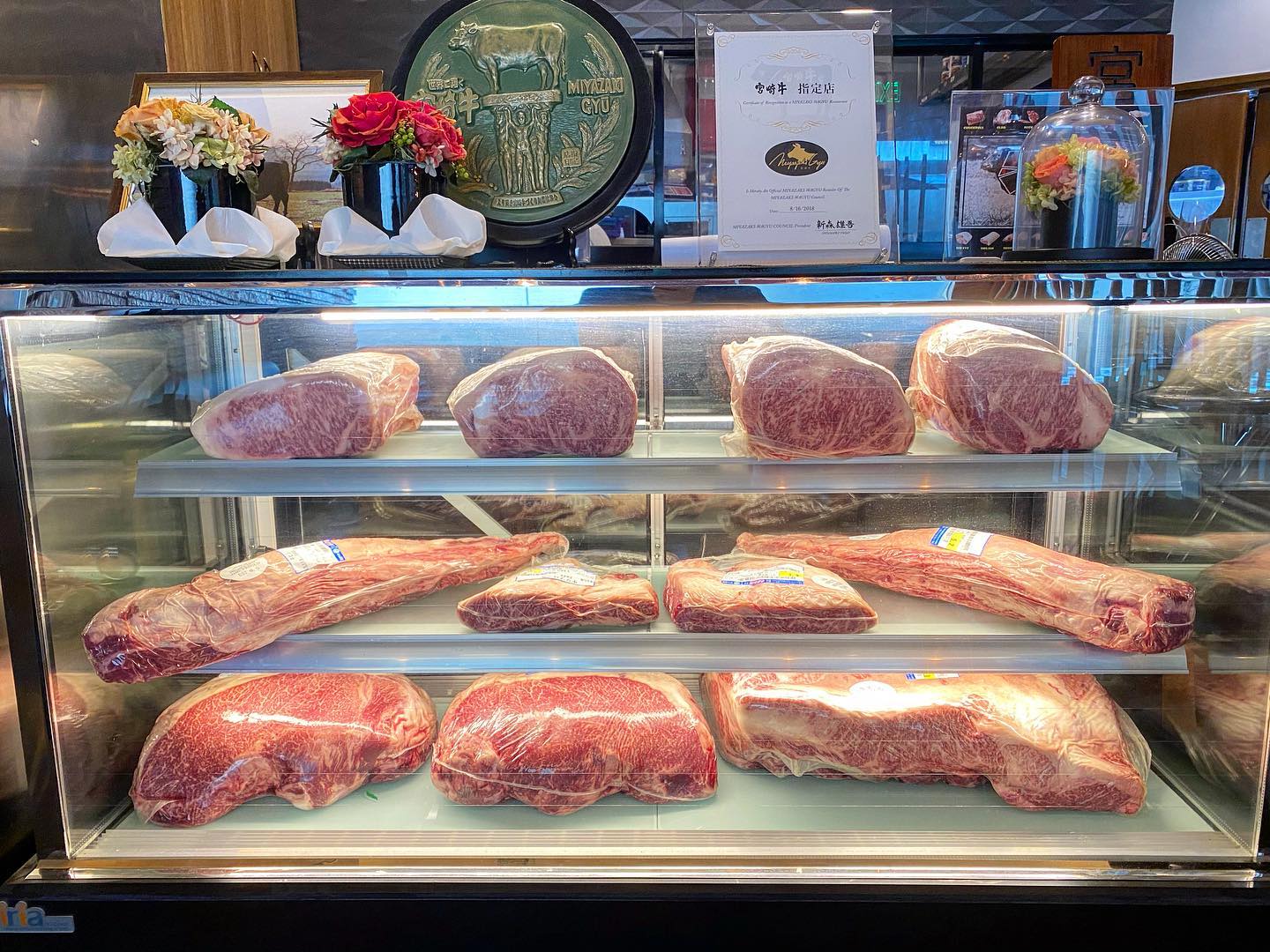 Miyazaki Gyu proudly serves prized wagyu from Miyazaki Prefecture in Japan. You can enjoy its melts-in-your-mouth taste in steak form or dip it in flavorful broths.

They also serve premium dishes, such as high-grade sushi, other steak cuts, and fresh sides for shabu-shabu. If you want a luxurious hotpot meal, this is the right place.

6. Jiang Nan Hotpot – open until 2AM in Makati 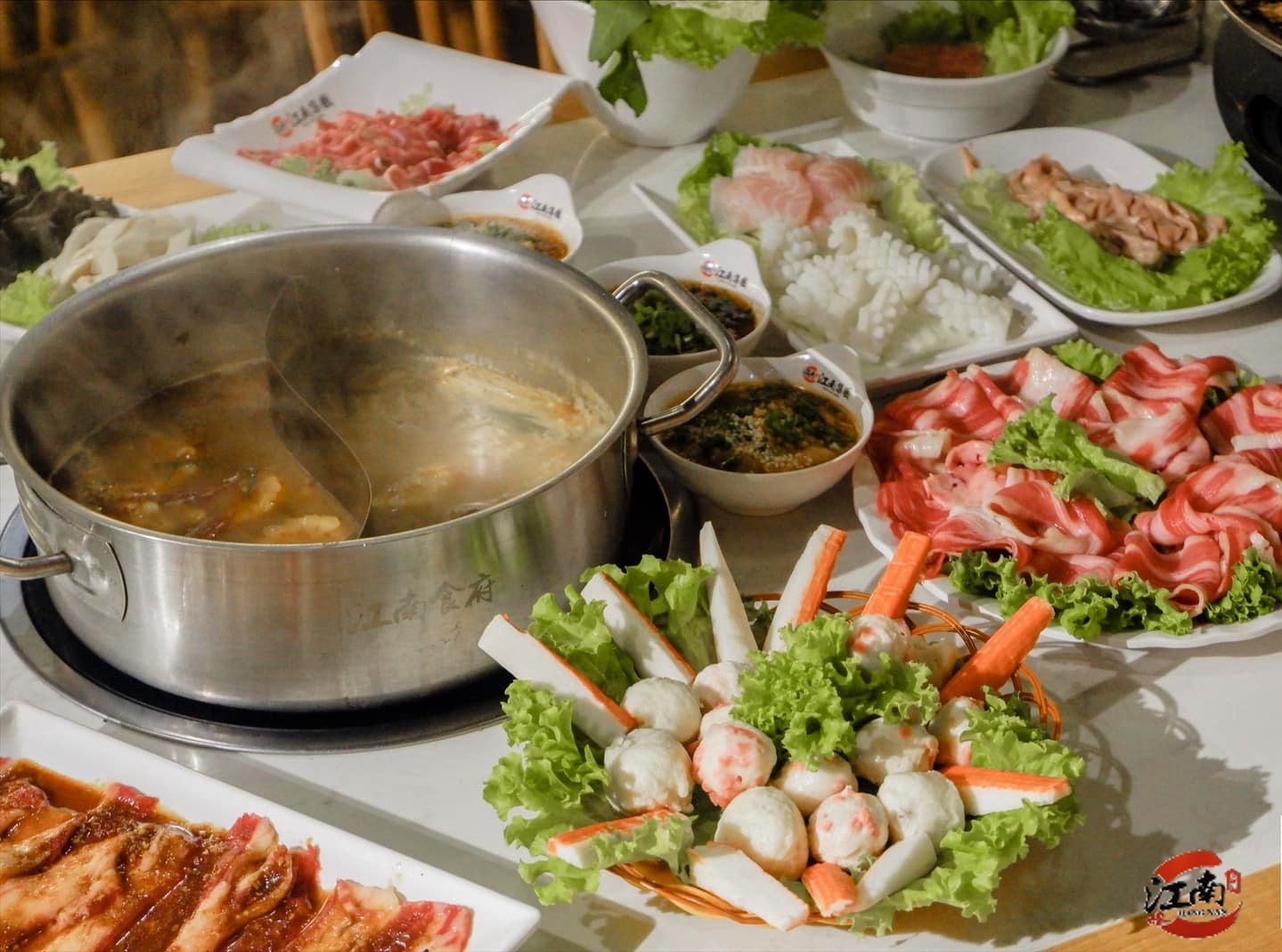 Sudden craving for a steaming hot soup is something that people who had too many to drink would understand. At Jian Nan Hotpot, you’d have a solid two-hour window to slurp on some Chinese hotpot after midnight.

This spot in the middle of Makati serves all the savory flavors of Chinese cuisine that are genuinely delectable, sober or not. 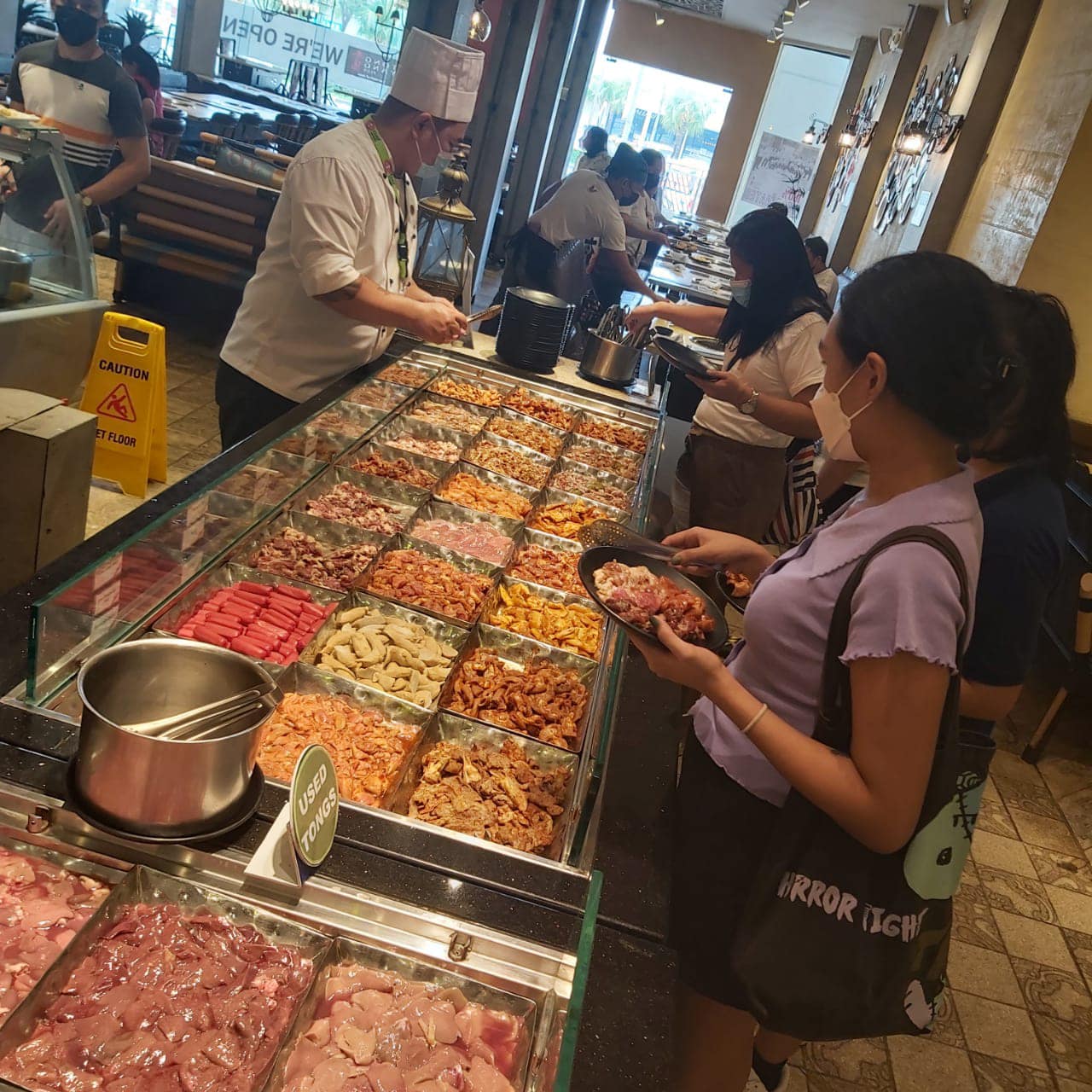 Tong Yang Plus has more than a dozen branches located in well-known malls. If you’ve never tried hotpot before, this restaurant is a good starting point since the whole place is far from intimidating.

Sipping warm broth on rainy days brings a cozy feeling, like sitting by the fire in freezing weather. We think that’s why hotpot and shabu-shabu restaurants have been around for ages and why we’re all so fond of them. It’s a great thing we have a lot of choices around the metro whenever we crave shabu-shabu.

Food guides around the Philippines: 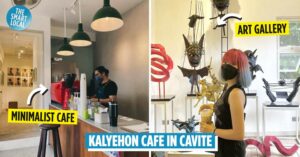 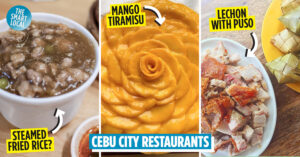